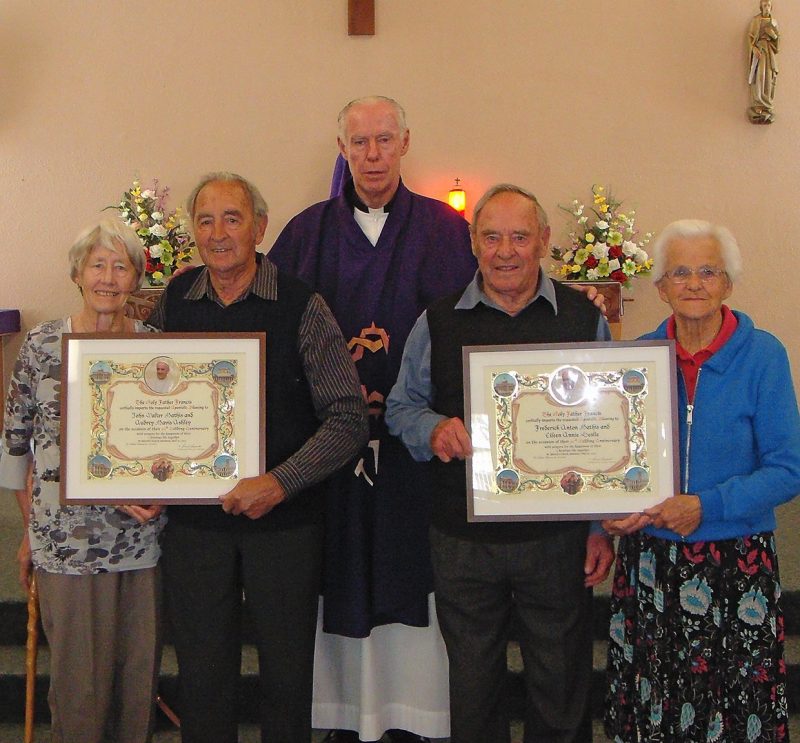 by JOHN FONG
History was made in Putaruru recently when two brothers and their respective wives celebrated their 60th wedding anniversaries within three weeks of each other. From left to right: Audrey and John Mathis, Fr Vincent Jones, and Frederick and Eileen Mathis, with their papal awards at St Patrick’s Church, Putaruru.

John Mathis married Audrey Ashley on April 30, 1955, and his brother Frederick married Eileen Leslie on May 21, 1955.
All four were born in Putaruru and have lived there all their lives and attend St Patrick Catholic Church.
John and Audrey are blessed with eight children, 21 grandchildren and eight great-grandchildren, while Frederick and Eileen have seven children, 19 grandchildren and five great-grandchildren.
John said that he and Audrey have a very happy marriage and are blessed also with six fine sons-in-law and two lovely daughters-in-law.
And how have they stayed together for all these years?
“Love and respect for each, and praying together,” he said.
Frederick said that patience, old-fashioned values, commitment and always being there for the other regardless of circumstances formed the basis of their successful marriage.
During the morning Mass at St Patrick Church, parish priest Fr Vincent Jones surprised the couples by presenting each with a framed blessing from the Pope.
Meanwhile, about 22km away in Tokoroa, parishioners of St Pius X, Kevin and Kathleen (Jo) Cantwell, also celebrated their 60th wedding anniversary. They were also presented with a papal blessing by Fr Jones. Mr and Mrs Cantwell were married in Wanganui on August 27, 1955, in St Mary’s Church by Fr Tom Cook, SM, a cousin of Mrs Cantwell’s father. In 1964, they moved to Tokoroa. Kevin was one of 10 siblings and Jo was one of nine. So, in keeping with tradition, they themselves have eight children, 21 grandchildren and 13 great-grandchildren.
Mrs Cantwell said that marriage is not a gravy ride and can be hard work. There must be commitment from both spouses.
“Unless each person is prepared to sacrifice some of their wants for the needs of their relationship and their families, it will never succeed,” she said, and added: “And a sense of humour is also essential!”
She said that there had been bad times which had to be faced together. Their faith has been a lifeline and the knowledge that there is someone greater than themselves is a great comfort and support. They also appreciate the support of like-minded people and the input and friendship of Sisters and clergy.
“Any couple” said Mrs Cantwell, “who have remained loyal to each other for many years is just as worthy of this special [papal] award!”
Posted in News